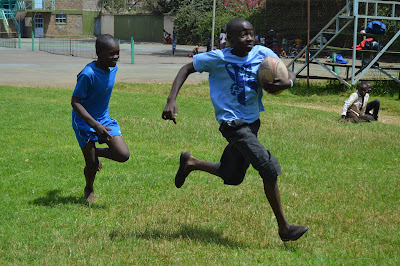 45 Ushindi Boys Club members from St. Catherine and Nazarene Primary Schools on Saturday 30th September 2017 gathered at Sadili Oval grounds for their Sports Day. The half day event was organized and facilitated by Sadili Staff.

The event kicked off at 9:00 am with a short but powerful life skills session on ‘Goals’ by Kevin Ayuko, a Social Educator at Sadili. Kevin gave the boys time to think about, and then express their short and long term goals. It turned out that most of the boys hope to improve in various subjects in class, make more friends and be better in sport in the short term. In the long term, the boys would like to be teachers, engineers, pilots, lawyers, accountants among other prestigious professions. “To achieve these goals, you have no choice but to work hard, be a go-getter and never give up,” Kevin reminded them. This discussion was followed by a short question and answer session where each person was given an opportunity to ask anything they wanted to know about the topic.

The life skills session was followed by a thrilling sport session, a time that everyone had been looking forward to. Led by Coach Eddy Amos, the boys were first divided into 4 teams: Mwamba, Harlequins, KCB and Homeboys. They were grouped in such a way that each team got to play against all the other teams. The first sport was Rugby, where Team Harlequins emerged victors while Mwamba was second. Football, however, was dominated by KCB while Mwamba took second position.

The games were then followed by a delicious lunch that was enjoyed by everyone.
“It has been a wonderful event!” remarked Brian of St. Catherine Primary School. “I enjoyed the games, liked interacting with boys from Nazarene Primary School and was inspired by the life skills session we had on ‘Goals’.”

“I have always enjoyed playing rugby, and this was a good opportunity for me show off to the others how good I am,” said Maxwell of Nazarene Primary School.

We are happy that the boys showed up in such a big number for their sports day and congratulate the teams that won. We are looking forward to another one of such events in the near future.

Posted by Eleanor Orao at 5:01 AM No comments: 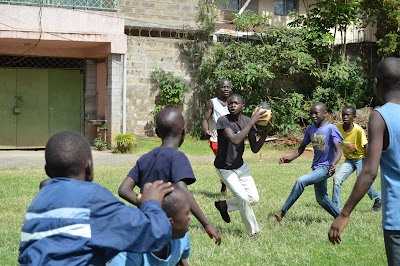 The weather was kind to all at Sadili Oval on Saturday 24th June 2017 as 57 Ushindi Boys Club members from St. Catherine and Nazarene Primary Schools eagerly and enthusiastically took part in their Sports Day, the first one of its kind since it (Ushindi Boys Club) was founded. The half-day event started with a short highly educative life skills session where Sadili’s social educators Kevin Ayuko, Brighton Savayi and Hassan Noor facilitated a discussion on ‘Leadership’ and ‘Drug abuse’. 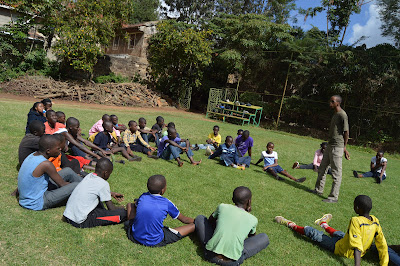 The boys were given important pieces of advice on good leadership skills, and were reminded that anyone can be a leader. “Anyone at any age can be a leader,” said Hassan Noor. “It does not matter how young or old you are, as long as you have been charged with any responsibility, both at school and at home.” This was followed by a brief discussion on drug abuse and its effects on their education.

After the life skills session, the boys moved forward to the most exciting part of the day: sports. They played Rugby, Basketball and Football.

For football, the two schools, St. Catherine’s and Nazarene played against each other. The equally competitive teams battled it out and both proved to be too strong to be beaten by the opponent. The game ended in a 1-1 draw.

The games were then followed by a delicious lunch that was enjoyed by everyone.

“What a great day it has been!” remarked Bravin of Nazarene Primary School. “I am looking forward to more of such events in future, and I hope the next one will come soon”.

We are proud of the boys for having shown up in such a huge number for their first ever sports day and congratulate the winning team. We all agree however that in as much as the winning may be important, the taking part matters more! 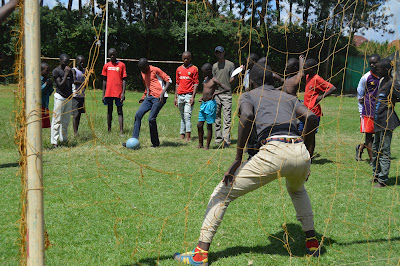 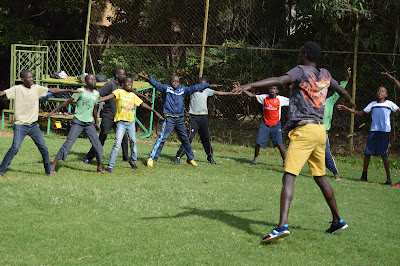 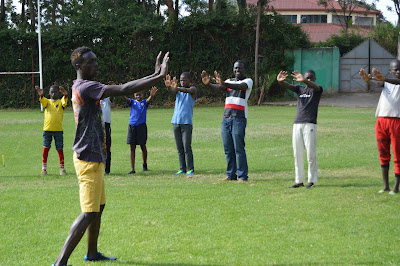 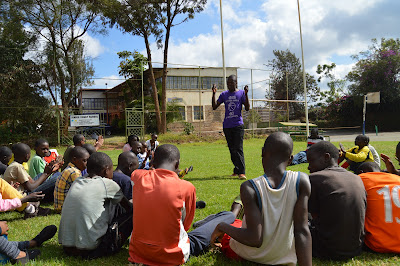 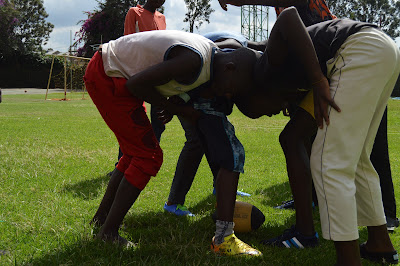 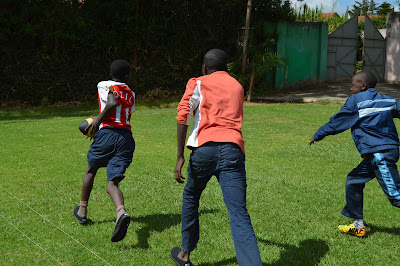 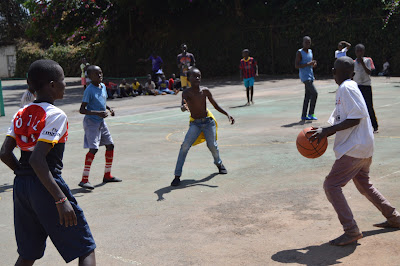 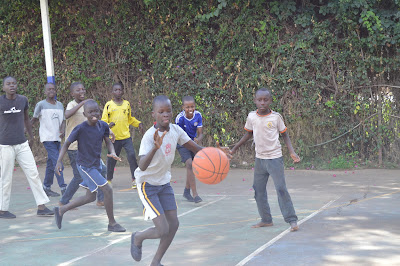 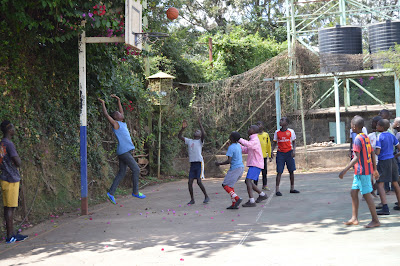 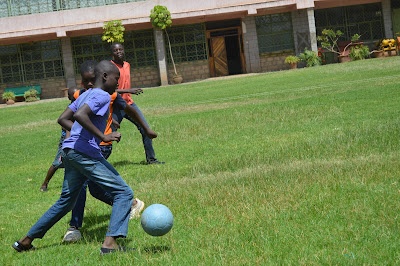 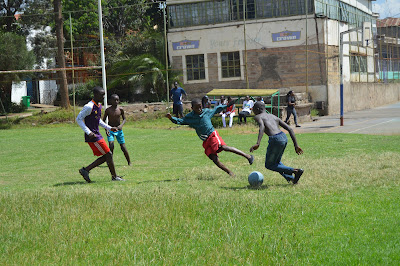 Posted by Eleanor Orao at 2:05 AM No comments: 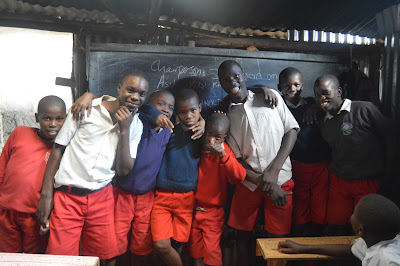 St. Catherine Primary school’s Ushindi Boys Club members convened at one of the classes in the school to take part in the club elections held on Tuesday 23rd May 2017 to elect new club officials. The excited boys listened as each candidate was given a platform to explain why they were fit for their roles. The elections were organized and presided over by Sadili Staff including Kevin Ayuko, Eddy Amos, Hassan Noor and Brighton Savayi.

The following pupils were voted in as the new leaders:

Like all effective teams, each leader of the club has been assigned specific responsibilities and tasks for which they are accountable. 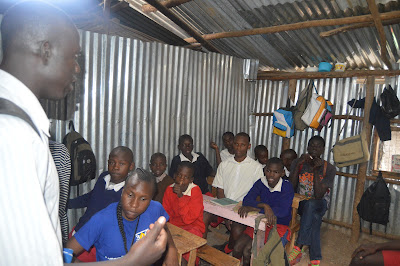 “Through your election, your peers have recognized your leadership skills and potential to manage the club effectively. Your term in office will offer many opportunities to learn new skills, enhance the experience of others and grow as a leader.  By taking advantage of the many opportunities to learn and grow, your term can have personal and professional development benefits that will last a lifetime,” said Kevin Ayuko as he addressed the newly elected leaders.

Kevin, Brighton, Hassan and Amos further congratulated the newly elected officer bearers of the Club and wished them best of luck for the coming year.

St. Catherine Primary School is located in Nairobi’s Kibera Slums, an area where young people face numerous challenges as they transit from adolescence into adulthood.

Founded by Dr. Liz Odera, the Ushindi Boys Club is a program in which boys aged between 11 and 17 (Std 6 and Form 2) gain entry and are expected to become graduating leaders. The program primarily focuses on Boys in school. The project uses sports, mainly athletics, basketball and tennis, to the address various issues affecting young boys.
Posted by Eleanor Orao at 12:17 AM No comments:

We proudly introduce the leadership team for Busia County's Ushindi Boys Clubs this year and we wish them well as they undertake their duties. Congratulations boys!
Posted by Eleanor Orao at 12:22 AM No comments: